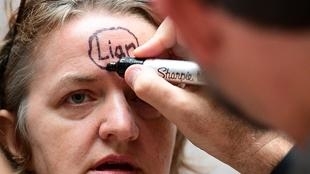 Annaca Kobayashi is a #metoo liar Canadian woman that only received a conditional discharge and just 50 hours of community service after she repeatedly lied to police and falsely accused a man of sexual assault, a man whom she named to police.

Kobayashi, 19, of Langford, British Columbia, pleaded guilty to public mischief after giving multiple false statements to police claiming she had been sexually assaulted by a man she knew. Crown prosecutor Steve Salmond told the court that Kobayashi told police that she had gone to Home Depot. When she was leaving the store and in the parking lot, she said, a young man she knew jumped in the passenger seat of her car at around 9 p.m. She claimed this man, who thankfully has not been named in media reports, tried to convince her to hang out with him instead of leaving the store to see her boyfriend. When Kobayashi told him no, she said he pulled out a knife and forced her to drive to his home, where he sexually assaulted her.

Police went to Home Depot to review surveillance footage of the parking lot. They saw Kobayashi walking to her car but no one else, proving she lied. An investigator then called Kobayashi with the information and she admitted she made that part up, saying she had gone to the man’s home voluntarily but insisting he did actually sexually assault her.

Kobayashi was warned about making false statements and told police would try to corroborate her second claim. Kobayashi said she understood about the potential for a public mischief charge.

Police questioned the man, who said he had consensual sex with Kobayashi and provided details that contradicted her version of events. At a third interview with police, Kobayashi admitted she had lied.

Police pursued a charge of public mischief because of the impact on the young man and the waste of police resources, said Salmond. He asked for a suspended sentence and community work service as repayment for the effort and resources that went into the investigation.

Defence lawyer Elizabeth Weisenburger emphasized Kobayashi’s youth and guilty plea. Kobayashi acknowledges she had a sexual relationship with the man, “but there were some issues around whether it was consensual,” said Weisenburger.

Weisenburger requested the conditional discharge to give Kobayashi “a better chance at a fresh start” that would allow her to pursue a career in health care. Had the young man she accused been charged, he would have faced a decade or more in prison.

In its article about Kobayashi’s lies, the lamestream media insisted that false accusations are rare, however the daily wire showed statistical facts that they are not as rare as the seedy media falsely claims.