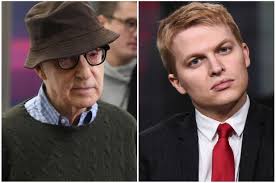 Woody Allen’s biography is no longer going to be published as Hachette publishers refused to do so. The rights of the biography have been returned to the famous film director, Woody Allen after Hachette’s employees staged a walkout in protest as Allen was accused of child sex abuse by his ex-partner.

It has been suspected that this decision probably has something to do with celebrity journalist and Allen’s son Ronan Farrow stating he would cut ties with the publishing company. He again denied that Allen molested his sister and Allen’s adopted daughter, Dylan over two decades ago.

Ronan Farrow is the face of the #MeToo movement for his reporting on how Harvey Weinstein got away with sexual abuse for years. It’s ironic that Farrow is now denying his own father’s sex abuse allegations. After two investigations Woody Allen was never charged of abusing his adopted daughter. One of his children Moses Farrow, went public in 2018 stating that Allen was innocent and people who condemned the director was “based on a discredited accusation for fear or not being on the ‘right’ side of a major social movement.”