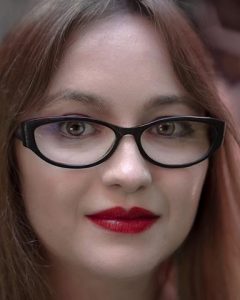 In May 2018 Justice For Men and Boys were delighted to announce Elizabeth Hobson as Director of Communications, she was already a well-known and highly respected Men’s Rights Activist. She was appointed party leader on 26 May, 2020, when Mike Buchanan became the party chairman.

Elizabeth Hobson is a mother of two boys, and currently studying for a BA in History at the Open University. She proudly calls herself an ”Anti-Feminist Gender Equality Activist,” she has also worked with Trigger Warning, The Liberty Belles and Ladies for Philip Davies; as well as being a key member of the organising team for the highly successful ”March for Men / Messages for Men” conferences in London in 2017, 2018 and 2019. Video playlists for the conferences are here. She is now solely responsible for the conferences, the next will be held in London on 14 November, 2020.

Her presentation at the fourth International Conference on Men’s Issues, held at London Excel in July 2018, was titled, Activating the Non-Feminist Sector.

Her areas of particular interest include the family and father’s rights, MGM, feminism and freedom. Elizabeth wants to end the ”Sex War” artificially constructed by feminist crazies – and pursue a more just society based on classical liberal values such as liberty, equality and meritocracy.

Check out the J4MB YouTube channel here and the playlists here.